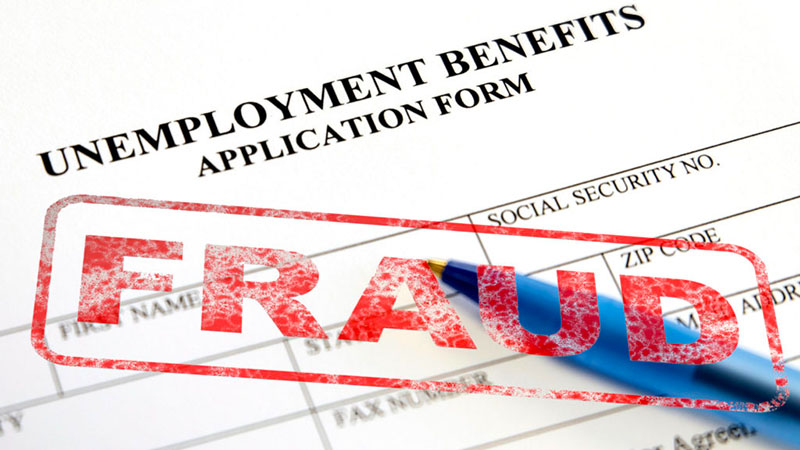 Recently one of our own library workers, and one of our patrons, have received a letter in the mail from the Kansas Department of Labor. This letter was a notice that their application to receive unemployment benefits was either denied, or waiting for a response from their previous employer. If you receive one of these letters, you might visit the Kansas Department of Labor’s website and report any fraudulent activity (link below). I took some time to put together some information about recent events that could have played a part in this uptick of fraudulent activity, and why it has become more widespread.

“Like states all across the country, Kansas is seeing an increase in reports of unemployment claim fraud due to identity theft. Fraudulent claims are being filed using the names and personal information of people who have not lost their jobs. People are often unaware a claim has been made on their behalf until they receive a determination notice in the mail from KDOL or until their employer receives a notice to verify the employee’s status. A review of these fraudulent claims indicates that scammers are finding personal information through incidents like credit card data breaches and then using that information to illegally attempt to collect unemployment. These fraudulent attempts are not due to a breach of the KDOL unemployment system or because of anything that you have done.” – Kansas Department of Labor website

Between the recent FireEye hack by the russian government, and the 2017 Equifax data breach, there is little reason to believe our personal information is private. FireEye, is a major U.S. cybersecurity company with extensive government contracts. Fireye provides hardware, software, and services to investigate cybersecurity attacks, protect against malicious software, and analyze IT security risks. The attackers penetrated federal computer systems through a popular piece of server software offered through Solarwind, another software company. Microsoft has said the hackers compromised SolarWinds’ Orion monitoring and management software, allowing them to “impersonate any of the organization’s existing users and accounts, including highly privileged accounts.”

Call it the latest phase in what could be a cyber-era cold war. The federal agencies targeted in the attack have a storehouse of personal information about Americans, of course. Comprehensive details on the motivations of the attackers remain unclear. Some of the possible information exposed could include personnel data, including foreign agents, planning, operations, and a number of networks. Networks at the Department of Energy and the National Nuclear Security Administration, which manages the country’s nuclear weapons stockpile, also may have been compromised according to reports by the Washington Post and Politico. The system is used by hundreds of thousands of organizations globally, including most Fortune 500 companies and multiple U.S. federal agencies, which will now be scrambling to patch up their networks.

The Equifax data breach occurred between May and July 2017 at the American credit bureau Equifax. Private records of 147.9 million Americans, along with 15.2 million British citizens and about 19,000 Canadian citizens were compromised in the breach, making it one of the largest cybercrimes related to identity theft. The company was initially hacked via a consumer complaint web portal, with the attackers using a widely known vulnerability that should have been patched but, due to failures in Equifax’s internal processes, wasn’t. Equifax did not publicize the breach until more than a month after they discovered it had happened; stock sales by top executives around this time gave rise to accusations of insider trading. It is believed that the Chinese were responsible for these attacks, but will we ever know? Allegedly this information never hit the web for just anyone to grab the data, but It is not unreasonable to think that these sorts of data breaches happen more often and more covertly.